We went deeper into the Eye of the All Father, following the eight sets of human footprints. Umbero invisibly snuck up and came back to tell us it was a band of Uthgardt barbarians with a captive white baby dragon. We snuck up onto a level behind them while they chipped away at a frozen door. Exploring, we found a lever that Harshnag pulled. It closed the outer gate, freaking out the barbarians. We opened it again and kept sneaking around.

We could find no other way into the central chamber except some portcullises which were too heavy, so I spoke to the barbarians and tried to convince them to let us help. They were searching for their friend Noori. I said we’d help, but when we brought Harshnag down to try and open the door, they panicked and fought us. The baby dragon, seeing its opportunity, helped us. We freed the white dragon and pushed the barbarians up the long corridor towards the gate and left them outside of it, using the lever to lock them out. 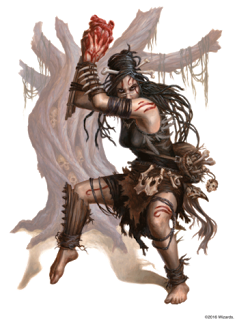 We finally got into the central room once Harshnag punched through the icy door. We found ourselves ina  large central room with six giant statues, representing each race of giants, surrounding a large central giant figure. Harshnag told me that is Annam, the All Father. We could see that the other six statues had room for weapons in their hands, and five out of the six had their weapons in hand. The frost giant was missing his. We also saw a gateway with six runes carved into them. As I read them out, Harshnag was amazed. They are runes, he says, and I should not be able to read them. It should be impossible.

We explored the room and Halani and I cast some magic on the runes. Unfortunately that set off some traps, so we are all resting early today because we got badly hurt. Harshnag laughed at me for being able to read runes but stupid enough to set them off.

We opened the door in the southern wall and found ourselves in a feast hall, fighting a remorhaz. After we killed it, we found the frost giant statue’s axe, and a dead giant with a fine breastplate it had been using as a bowl or scoop or something, which we gave to Umbero. We also found a beautiful opal that had the rune of fire on it. We believe we can use it to cast powerful magic, so I am holding on to it. Going further into the temple, through the north door and up the stairs, we found a shard of never-melting ice with the ice rune on it. Halani is holding on to that too and experimenting with its power.

Going deeper in up the north side of the temple we found a series of tunnels that Harshnag could not enter. We went in and fought disgusting amounts of ice spiders at their nest. We found a couple of things for our efforts: a potion of climbing, and Noori! She was wrapped in spider silk and near death, so we healed her and took her back to the temple entrance. Her compatriots were gone so we sent a sending spell to the shaman who had been with the warband to let her know Noori was outside and safe. We went back in to the north side and set off a trap! A boulder came rolling towards us, so we had to cast a flying spell on everyone to dodge it, and Harshnag had to drink the potion of diminution we had to slip past the boulder.

Having found no lever or key to the magical gateway, we decide to experiment more with the dangerous runes. Harshnag tried touching the statues’ weapons to the runes and lo and behold, when he touched the frost weapon to the frost rune, the magical gateway opened. We entered…

There were further statues in this hexagonal room and a shining ghost of a female storm giant. She looked so familiar.

‘My daughter, I am so proud of you and how far you have come.’

Let me set it all down with just the facts, as my head is still spinning even now. She was Queen Neri, the Storm Queen, and I am her daughter, Serissa, heir to the Storm Throne. We were slain on the Whalebones Islands and since she was a powerful cleric, she was able to beg Annam to grant me my life back when she found herself before his throne. He reincarnated me as a human girl. The Zhentarrim agents who killed us had been hired by my sisters Merin and Nim, who in turn had been spurred on to kill us by a blue dragon called Iymrith, disguised as a storm giant, who has usurped my father the Storm King. My giant father is imprisoned, where, my mother does not know.

Annam has broken the Ordning to spur his complacent children into action. My mother cannot say exactly how to fix the Ordning, only that I must rescue my father, root out the evil that corrupts the Storm Throne and restore it. Once I have done all this, Annam will call on me to pass judgement on the Ordning… whatever that means. In order to get to the Storm Throne I must find one of the magical conch shells that belong to the leader of each giant race. I guess I have lost two chances at Gruud Haug and Ironslag, so three more exist. These have the power to transport me to Maelstrom, the underwater city of my people.

That was all my mother could tell me. We said our goodbyes and she vanished.

Blindly, I stumbled my way out of the temple to get some fresh air. I found outside the gate an amulet. It was a gift from Noori’s tribe, and it protects against detection and location spells. As I tried to take in all that I had just learnt another astounding thing happened: a giant airship with a red baloon arrived and rolled down its ladder for us. The crew all wear black masks, and are the servants of Klauth, the ancient red dragon who owns (?!?!) this continent. He has bidden them to do our will until we fix the situation with the giants.