Ceryi is a member of the Planar Trade Consortium, and so it was through her organisation we were able to be ushered through a secret Consortium gateway to a gate on Bytopia, and from there to a gate to a place called Oerth where we would find White Plume Mountain. As we went, we were told about the message, a poem, from the thief of these rare weapons. The weapon known as Wave would be found near the ‘Beast in the Boiling Bubble’. The weapon Whelm, at ‘Water Spouts Double’. And something called Blackrazor underneath an inverted ziggurat. We were also told about Keraptis, a wizard who had vanished into the mountain for solitude about 1300 years ago. All this, and getting to Oerth, took about an hour.

Through the gate we arrived at a cave called Dead Gnoll’s Eye Socket. Outside it was snowing and dark. We headed northwest to the mountain, with me taking the form of a giant flying lizard, and Marja pointing the way. Looking for entry, we found a small 40 foot cave from which steam emanated periodically. Exploring the cave through communing with nature and moving about inside the stone using a new spell I had recently learned to use, I found a trap door in the floor that we could go through.

Under that was a giant spiral staircase, and when we reached the bottom of that we found ourselves walking down a corridor with a foot of stagnant water throughout. It took us another hour from the gate to the end of the corridor, where we met the gynosphinx. She was in terrible condition and bored out of her mind. After trying to talk to her and figure a way to get her free of the wizard’s bond that had trapped her here, presumably for almost 1300 years, she gave us a very easy riddle about the moon. We asked her name, which was Tessa, and sat by her for a while, trying to figure out how to free her. In the end, Marja and I cast dispel magic at the same time, and she was freed. She cast Banish on herself and went back to wherever she comes from. 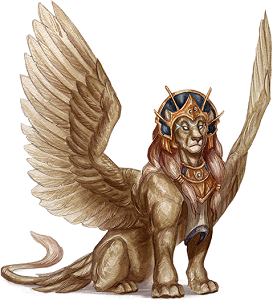 Behind her post was a fork, and we took the central path. Off of that path we discovered a pool of water, at the bottom of which was a valve that I imagined would drain the water… but none of us were strong enough to move it. Back on the path, we found ourselves in a room with a staircase leading up. Suddenly two naked women emerged from the water, but I could tell they were clearly something monstrous, and as none of us were fooled by them, they attacked, their bodies contorting like moving seaweed. They tried to drown Toledo and Word underwater, but that was a mistake because Toledo doesn’t breathe, so we were able to focus on freeing word and ending the monsters.

Exploring the deeper water at the centre of the room, I found a set of magical chainmail, a beautiful necklace, and some money. We decided to take a quick rest there. At this point, it was four hours into our twenty four hour ultimatum. At the end of that, we went up the stairs to find further corridors, further doors.

His name as Burket, and his female friend who walked out at that point – and turned into a werewolf! – was called Snarler. After a brief fight where, despite a fear spell from Snarler which made Toledo cry because she thought she wasn’t a person, we managed to subdue the two. We said we didn’t want to hurt them and dropped a Dispel Magic spell on Snarler. It worked, and she was able to see her way past the compulsion put on her to guard this dungeon. We left her to it to dispel the spell on her mate, and continued on our way.

In a room nearby, through three heavily sealed doors, we entered a dream. Protected by a thin membrane, we were walking in a large corridor beneath a boiling lake. Walking to the centre, we found ourselves faced with a huge crab. After escaping its clutches and backing off into the corridor, we realised he didn’t want to break the membrane, so we talked to him just out of reach. We discovered this was pointless however, as he was an insane solipsist. So we polymorphed him into a tiny snail and raided the treasure chest behind him. Within we found lots of money, goggles of night, and the trident known as Wave. One down, two to go. After six and a half hours in the bowels of the mountain, we moved into the north-east corridor of the fork that Tessa had been guarding. Down this corridor Toledo had her feet melted by a horrible green slime, so we had to fly with the help of my pixies once more. We entered a room of five flesh golems and failed to answer their riddle in time, so we had to flee, getting badly hurt in the process. But after recovering from that (for they did not chase us after that room!) we crossed a one-way turnstile into a room with a strange trap. There were discs on chains, suspended over boiling mud with geysers that erupted every few minutes. Rather than trying to be clever, we just flew past this and went into the next section of cave. There we ran into a vampire. After dispatching with him, we found he had been guarding a stash of money, potions, scrolls and the warhammer known as Whelm. It called out to me in a dwarven sounding voice as I threw it in the bag. By the time we were back in the fork, after breaking the turnstile in crocodile form, we had been in the dungeon for eight hours.

Going down the final, northwestern corridor, we found a trap with copper plates that created a hot energy field between them. This was fine for anything not metal, as I discovered when I threw a coin in. So I was able to hide our treasure in ‘druidspace’, but Toledo was all metal! So I changed her, via polymorph, into a human woman. She started crying because she had always wanted to know what it was like to be fleshy. But her joy soon ended as, once we got through the trap, we were attacked with ghouls. Once her polymorphed body expired, she was back to her normal self.

After the ghouls, we saw a room that was just… beyond description. Flying into it as a raven, trying to ignore the weird slippery floor, I found that I was suddenly flightless, on the ground, and slipping towards a pit trap. Some quich thinking from Marja, and with her vine whips she picked me up and saved me from the razorblades in the pit. So we rigged up an elaborate system where  I went first. I turned into a kangaroo, they tied the rope around my waist and let it out. I bounded, managing the slipperiness as much as I could, and found my way to the far door where the slipperiness ended. Next, with the rope held on both sides and Toledo using a chainmail shirt strung up like a harness, she slowly made her way across pulling with her hands. Next, Marja tied the rope to Word and crawled across as a caterpillar. Then we pulled Word across, but he was quick enough to make the leaps, so we didn’t have to tug him out of the pits.

After that awfulness, we were unimpressed when we saw a river of floating water with some waiting kayaks, and just moved on past that. Instead, we found ourselves in a room with an aquarium, then below that a terrarium, then below that another aquarium, and below that a pit with three flightless manticores and a door to another room. We completely ignored everything by sitting out of range for ten minutes and letting Marha’s lightning cloud strike at the manticores until they were dead. Then we flew over – via giant kookaburra – down to the door.

Within, we found a halfling called Qesnef, surrounded by luxuries. But we thought no way, something’s up. It was. He was an oni, and attacked. He didn’t last long. In the stash behind him, we found scrolls, potions, magic rings, money, and Blackrazor. It began to talk to me seductively. Straight in the bag he went.

It took a couple of hours for us to get back, but when we got to the fork where Tessa was, we were trapped! The voice of Keraptis boomed, saying we would just have to stay in here now, guarding the three weapons, and we were attacked by two efreet. We dismissed their summoned fire elementals and just hit him as hard as we could, all out of spell slots except for some minor healing. But we managed to overcome them, and fly out of the mountain back to the gate. 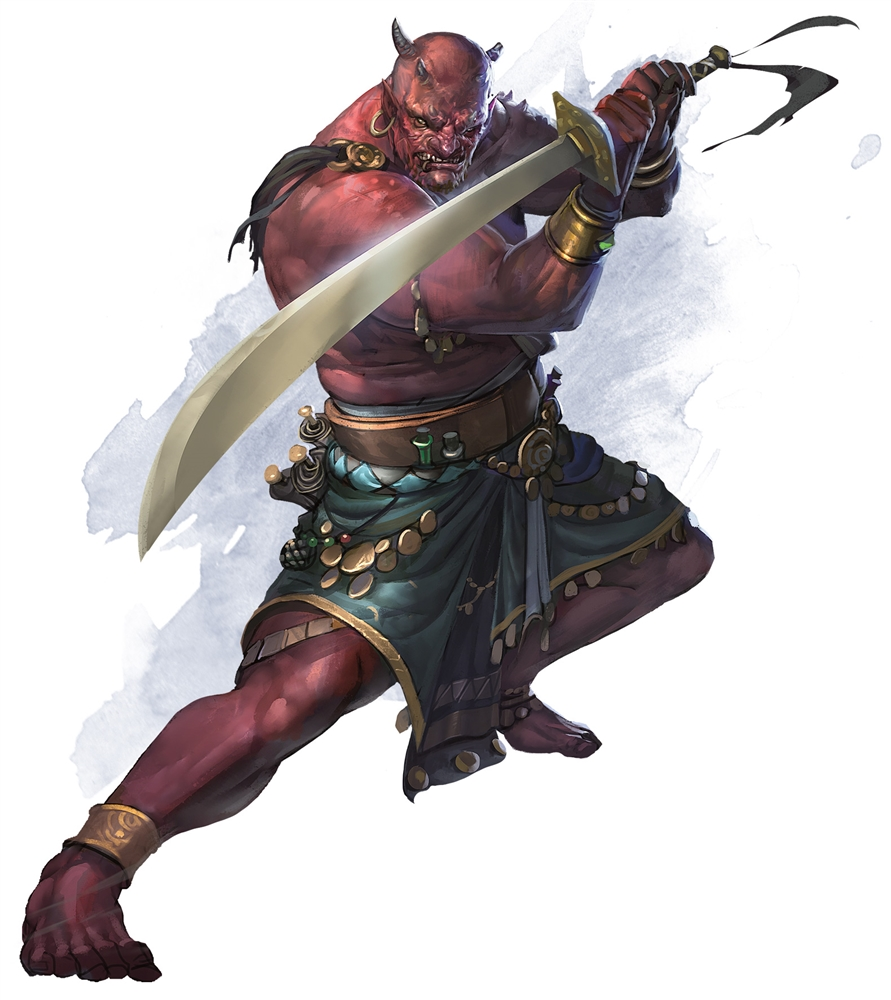 Well, we were done, but the Takers weren’t. Once we got back to Sigil, a good 13 or so hours after the ultimatum was issued, we found the office shut. So we went to Cnatha, desperate. I told him I was ready to join the Sensates, and that we needed his help. He led us to the Tin Puggle, the bar of the Takers. He had a word with the people in charge, and look at us, intimidated by the news that we made it through the mountain in less than half a day, they agreed to see us first thing tomorrow. As we were leaving, I spotted the Collectors, the people we ran into on the other side, last week, with the green roses. So, it was them all along. They set the Takers onto us. Well. I’m not one for revenge. Hopefully they get the message now that you cannot stop me when I put my mind to something.