Well, we finally had some time to take it easy. One of the first things I did, after a very long post-White-Plume sleep, was take Toledo shopping for a magic halberd and to fix her feet. While we were out and about, she asked me to refrain from shapechanging her again, as she did not like being something that wasn’t her. I told her I understand.

We managed to find a halberd +1 at Gax the polearm seller’s shop (he has every polearm imaginable!) and with Ceryi’s help we were able to find more special items that we were keen to purchase. For Toledo’s feet, we found some boots of springing and striding, which while not a perfect solution, at least helped her walk as fast as she used to. We also grabbed some bags of holding, winged boots and brooms of flying, cloaks of protection, a headband of intellect, a rope of climbing, a decanter of endless water, and an alchemy jug. Also we got my shield reinforced, and we got the metal orb identified. It’s something called a Driftglobe.

Also, it was time for me to join the Sensates properly. I went to the Civic Festhall, a magnificent place, in order to join. I had to be tested, and my tester was a blue dragonborn called Cyril Irefang. We had a verbal interview first about the philosophy behind the Sensates, how the details were there to be appreciated, how vicarious experience was flawed, but the arts were seen as an ideal way to share experience. Also he said that the Sensates were the most influential faction in Sigil, followed closely by the Takers, my favourite people… 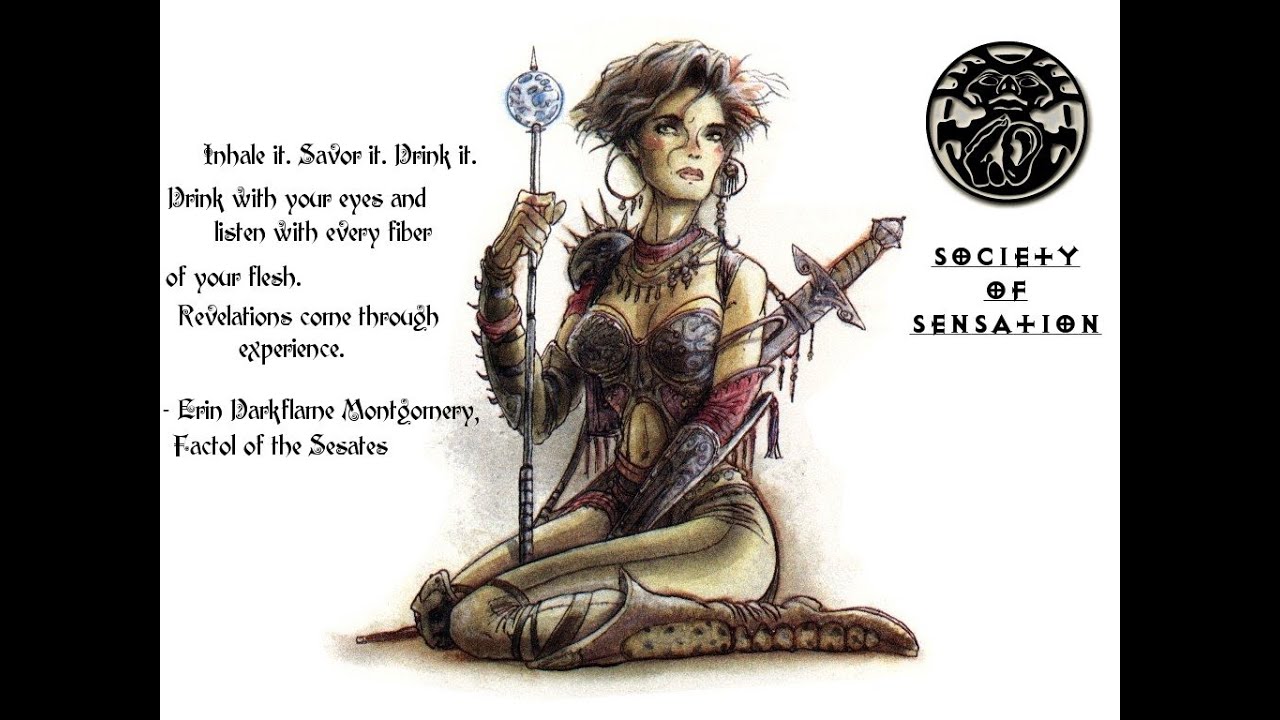 Then I had to take the test, which was to inject five experiences themed around the main five senses. I could tell that Cyril valued experiences that weren’t completely positive. So I decided to work him in slowly. He wasn’t overly impressed with my first sensation, which was a taste montage of Dandy’s meals – the first, cooked on a budget, in our shared home in Phlan, through the months til the final meal together, with the bittersweetness of farewell. He was slightly more impressed with the next sensation, which was a chronology of the sight of Merka, from when I first met the hulking but shy eagle-feathered half orc, to seeing him rage, to finally seeing him become a chief and grow into his full self. I decided for my third sensation to transition from the positivity of my first two sensations into what I had planned for the last two, by using the sound of Sione’s ukelele playing. First light, happy, but ending with the piece of music we once found, unfinished, haunting, leaving us all in stunned silence.

Then for my fourth, I hit him with smell. Rotting earth and wood, wet night, then the sizzle of magic in the nostrils, hideous smells issuing forth from a cauldron as I battled the three witches in the windmill. Then the smell of freshly tilled earth, freshly carpented wood, clean sheets, washed children, the light sweat of an old man, the light perfume of an old woman… and then flames, ashes, werewolves. The story of the windmill Old Bonegrinder did impress him indeed. But I wasn’t done.

For my final test I gave him touch. The feel of a man’s cheek, pudgy, pockmarked, stubbly, and tears running down it. My arm around his round shoulders, and putting a wooden stake into his calloused, broad hand. Holding him in both arms as he shook with grief. Pulling him back from danger, his weight straining against me. His arm across my chest to save me from stepping into danger. Breaking bread with him, clinking tankards together. His hand on my shoulder, the rush of healing magic pouring into me. And then ashes in my hands, the last time I ever saw my friend Donavich.

As I finished my test, we both had tears in our eyes, but I was definitely in the club. Amongst my new perks was wearing the guild symbol, getting into the public sensorium for free, and access to the private sensorium, tickets to shows and lectures. I met Enali Webspinner, a baurier who runs the day to day and can supply me with anything that can help me to experience new sensations. As part of my membership dies, it is expected that I share and teach, so the first thing I did was sign up to teach interactive classes on outback creatures, with immersive illusion magic and limited uses of polymorph.

I also started attending lectures myself. I listened to an interplanar traveller, something called a kender, and she talked about all sorts of wondrous sounding things like an Infinite Staircase and winged rainbow snake ladies. Also I went to a painting class.

Finally, I went to the History of Sigil class by Heironymus the gnome wizard. Sigil and the Lady have been here as long as anyone can remember. The factions just sprang up (though I do question that… perhaps he’s not trying to get to the truth hard enough?) and there used to be 50 of them, until the Faction War. He corrected something Madame Eva had told me. The three rules include the idea that wherever you are is the centre of existence, no matter where in the planes you are. I want to explore this idea, but I think I grasp it somewhat. Also I learned that to be ‘mazed’ means to be sent by the Lady into a pocket dimension, never to return. You have to be pretty important for her to do that. Also gods are forbidden in Sigil. The last god who was here, the god of portals and travel, tried to build a temple, and she destroyed him. I find this idea fascinating and too coincidental to not examine further. The god of portals and travel, in this place? Interesting. Also as a side note I found out that the Athar will give guided tours of dead gods! I’m very keen. Eventually when I went to the private sensorium, I met Brannamaynthax, the brass dragon librarian. He seemed to get increasingly frustrated by my requests for information, though he also seemed to be encouraging me at the same time. I’m not sure, especially since the first sensation he gave me was a bunch of people being killed by a dragon. He did hint though that if it was information I was looking for, I should seek out Lothar, a necromancer/diviner called the Master of Bones. I am only allowed three sensations a day, to avoid addiction to them, so I spend the first two examining sensations of fear and existential dread, as I search for Tenebrus. Then I finish with a lighter one so I can get through my day.

Today I was summoned to Cnatha’s office. There I met a glowing ball of light – a lantern archon from Mount Celestia, who said that its masters have selected me to deal with the Modron problem. Not sure why, or what it was all about, I gathered the team and followed my new friend – who I dubbed Happy – out of Sigil. To Mount Celestia..? Like… literal heaven..?