In order to get to Mount Celestia we were allowed access to the Sensates’ secret chamber of portals. The strangest thing about this chamber was that in the middle of the floor, instead of the usual Sensate guild symbol, it was a symbol of the Lady of Pain. I was sworn to secrecy on this, but still… how interesting…

We found ourselves at a distance from Mount Celestia, on a heavenly plain. The sky was bright and yet there were still stars, and the air whispered sweetly with a calm breeze. Happy led us to the sword archon Alziel, who outlined the situation for us and answered any questions we could think of. The Modrons were about to arrive at a town called Heart’s Faith. It was a gate town leading back to the outer planes and unfortunately buildings had popped up on the roads the Modrons would take because there had been an influx of orphans from a world at war. The archons needed me to deal with it because they were worried about getting the taint of chaos on them, which you have to admit is kind of bizarre seeing as the Modrons are supposed to be the most lawful beings…

We headed over to talk to the marching modrons. They were observed by crowd of lantern archons as they marched not in a line, but in a hemisphere. As we got ready to head in, we ran into Tessa, the gynosphinx we freed in White Plume Mountain! She had followed the modrons from Arcadia, as her god there had told her to find out what was going on. She joined us and told us what she knew, including more information about their formation, their heirarchical structure, and that no one even knew why it was that they had to march.

We tried to fly in with Toledo on Tessa’s back and Marja and Word on my back as a Quetzalcoatlus, but Tessa and Toledo were nearly trampled underfoot, so we rolled them out. Instead, I tried flying in, in raven form. I was stopped further in and questioned, so I turned human again to speak. The questions were long and boring, and when I said I was an orphan they told me that was ‘unlawful’, so I lied. But then the next one I got to asked if I had a permit to speak to him, and when I lied, he somehow knew and said I had ‘failed the test’. Bizarre. How does it even know how to catch a lie? Something is certainly rotten in the state of Modron.

So with that being a failure we raced to get to Heart’s Faith. At the gate we heard that the usual lamassu guards were away at a conference, so there were only humanoids. From them we also learned that the mayor was out of town, and we had to find the acting mayor. So we ran through the streets, trying to cry out to as many people as possible to warn them to get off the roads. We met with Cauldronborn, the acting mayor, and he was very unsure of himself, so we tried our best to take charge.

With the help of my pixies using dancing lights in the sky, we tried to get as many people as possible to a far corner of the walled city. But by the time that most of them were there, the Modrons had already arrived. I stayed at the corner and ordered pixies and people to rush down the streets calling out to everyone to get out and run to safety. Marja and Tessa meanwhile flew to the gate and Marja tried to blow them back with a wall of wind… but all that resulted in was the Modrons started trampling over each other and got in eventually. Tessa meanwhile cast a divination and received back the rhyme ‘What immortal hand or eye could frame thy fearful symmetry’.

So we all tried our hardest, warning everyone we could, rescuing the young, old and infirm where we could, before the destructive tide of Modrons. I rescued Cauldronborn from being crushed and tried to argue logically with the modrons to back down. At one point the march came to a halt and I found the cause of it to be a bunch of old men at a tavern. One clever old man had thought to fib and say to them that there existed a treaty which they were breaking right now. But it only took three minutes or so before they realised he was fibbing and the march started anew.

Whilst I desperately moved to save children, Marja cast a spell of entanglement and that worked to slow them down some more. Through that, we were able to gain some time to save more lives. But soon the Modrons were at the harbour, and in order to get to the gate in the air, they dismantled ships to make a bridge.

It was during this long hold up in their march that I spotted the lead Modron and flew down to argue with him. I couldn’t reach him, but his inferior spoke to me. It was an infuriatingly frustrating conversation. The Modrons have no individuality, so no appeal to them on an individual level would work. The only progress I made at all was figuring out how to utterly break one’s logic: get it to state the date of the last march, and get it to state today’s date. In that way, I accidentally made one self-destruct. But another took his place immediately.

Eventually they were all gone, and we were left with the cleanup. Despite the real mess I made of things, the people were grateful for all that we tried.

But most important: I managed to get the rest of the locations of the march from the modron I spoke with. So we can going to follow them, Tessa too. And we’re going to try and fix the madness in the Modrons. 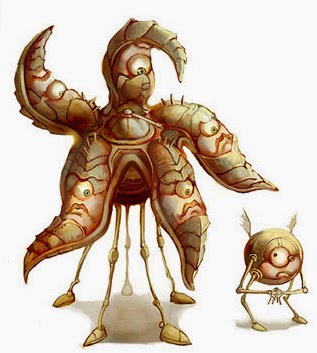