Warning: The following contains detailed spoilers for the final dungeon of the Tomb of Annihilation. Obviously.

Note: For brevity’s sake, I don’t say every time I check for traps, search for secret doors or use detect magic. Just assume stuff like that happens in every damn room!

Looking down into the next level, we saw a pentagonal room full of stinking plants. There were exits at two of the corners. I recognised this as the room I had seen when I hijacked into the eyeballs of a tomb guardian from the scrying pool. We decided to take Withers’ secret staircase down instead, and this was finally the end of that. There was a door off of it, leading to a small landing on an underground lake. There were some boats ahead of us, and further ahead, not just the walls of the one pentagonal room, but a few others of the same shape, and each of these were mounted on giant cogs. We figured there must be a way to rotate the rooms to open up new exits. Oz flew around and mapped out the giant cog rooms.

We left the lake for now and walked into a large corridor. On the wall were the following words in blood: Awaken Napaka. We considered whether this could have something to do with the mace we had. The corridor was large and sloping down towards a drape. We got a feeling, from the design of the corridor, that something might come out of the uphill part and roll down towards us. We backed out of the corridor and got Oz to check the drape for us. Opening it up, he found a four armed gargoyle statue, though one arm was broken off. It had the inscription “Three I need, then three more, then three more still to open the door.” Not keen to give up the nine gods just yet (or at least that was our assumption), we decided to come back later.

We made our way across the bridge from that corridor to the plant room we had seen from above. We looked into the next cog room, to the west. It had an acidic smell and grey slimy puddles. There were friezes of dragons on the walls with nozzles in them. But when we sent skeletons in and triggered the trap, we realised the acid trap had actually run out of acid! So we were able to cross into the next room. It was quite small, so for the time we just sent Oz in. There was an iron lectern with a control panel, and a puzzle on the wall. There was also another skeleton with a key head, and once we killed it we got the hexagonal key. Oz considered the puzzle and the control panel more, and we realised it was the control panel for the giant cogs, and the puzzle was a sort of map. We backed out into the plant room, the greatest extent of my psychic reach to Oz, and got him to test the panel.

This is where things started to go very, very wrong. Oz got something wrong and the room he was in started filling with green goo. At least he was flying… but then he touched another wrong button. The door slammed shut on the room. Then, through the psychic link, Oz and I were both paralysed by a voice in our heads. Something called Gora. It thought we were Acererak, but once it realised we weren’t, it took control of my mind. I ordered everyone to follow me down into the boats, and they followed! Then, when we were out in the middle of the lake, Gora the aboleth attacked! I was still under its control, but it didn’t realise we had so many allies with us. Ninya, as much as she hated touching it and being out in the middle of the water, was the one who managed to slay the hideous beast. My mind was freed. But for a moment there we were nearly very, very dead. 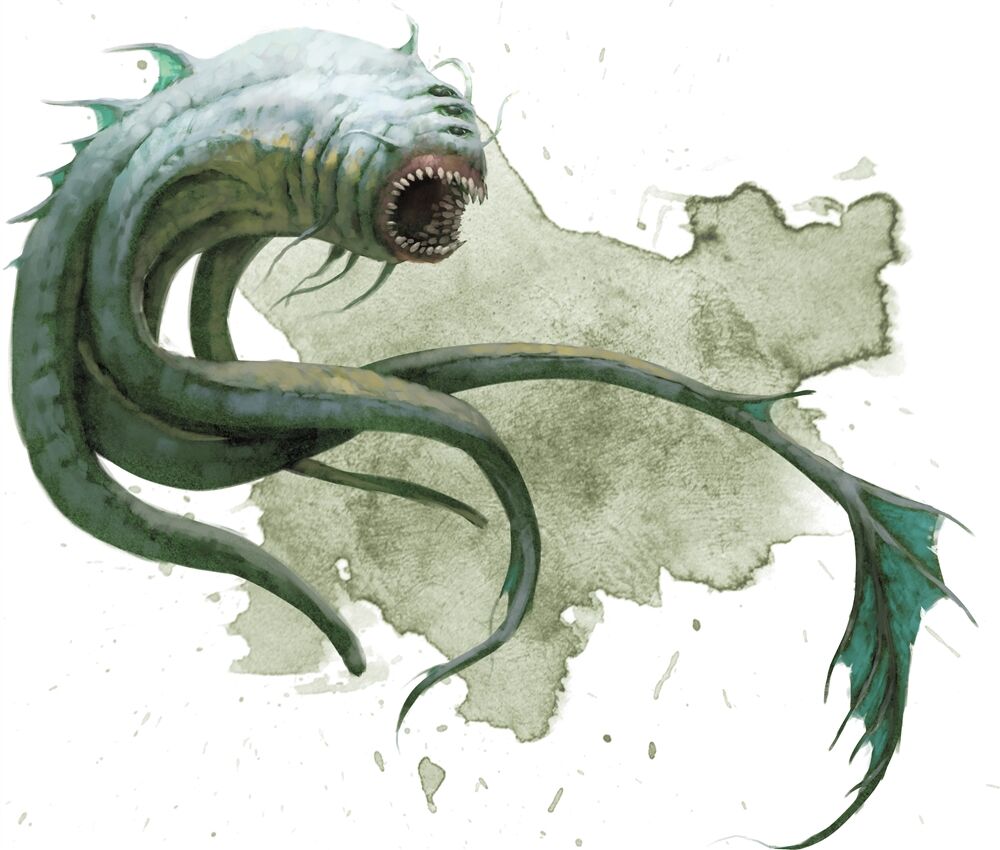 We went back up to the plant room, and Oz was no longer panicking: it seemed like the green goo had run out, and he was still able to work the control panel without touching the goo. So he figured out the rest of the puzzle, and the room we were in began to turn. At this, the shambling mounds made of plant matter in the room with us attacked. We had a misstep while fighting them at first – lightning attacks healed them! – but we were able to weed them all out. We noticed a small room at the northern end of the room, with a small cloud of gas billowing out and up. I sent a skeleton in, and it found the corpse of Lord Brixton, the final member of the Yellow Banners. The room was only a trap room. We were able to salvage from the ill-fated adventurer his backpack, some gems, and his draconic longsword.

We headed to the next pentagon room. On each wall was a wardrobe with different carvings on it, and a portcullis to the north that had five blood-drop shaped gems above it. We opened the first wardrobe, and an orc warband piled out from what looked like the plane of Acheron beyond. Once we defeated them, not only did the first of the blood-drop gems glow sanguine red, but I was able to replenish my zombie supply with orc zombies. In the next wardrobe was a portal to Gehenna, out of which flew four nasty Mezoloths. But we still overcame them, despite the horrible cloudkill spell they kept dropping on us. The next wardrobe, decorated with ornate clockwork, opened up into Mechanus and expelled a single monodrone. We didn’t want to kill the poor thing, so we decided to take a break from this puzzle, and see what other doors we could open around this cog.

There was a passage to the south, but I couldn’t follow, due to needing to hold onto the link with Oz, and my undead army could not follow into the much narrower passage. So the others went in. Within they found a semi-circular chamber with a life-sized golden statue of a mastodon on a stone cog, with jewelled tusks. The murals on the wall told us what we already knew: this was the tomb of Chigakare, which Mwaxanare had asked us to find, and fetch his chalice. We knew it would start a fight though, if we figured out what the puzzle was. Orvex was the one to spot it: there was a star-shaped indentation on the mastodon’s head. And where was a star-shaped key? Oz was looking right at one, the head of a lever on the control panel.

So after a rest, with some maneuvering, we got the star lever over to that group. Given that it seemed likely, with the evocation magic on the floor, that the floor would become lava, we could only fit six people in the room riding the masotodon, so Fionn and Zagmira left and came back to me. And then Orvex stuck the star key in.

I hear the fight was very hard. Yes, the floor was on fire. The mastodon started rotating, so Hugo and Orvex had to cling on for dear life (the tabaxis were all fine though). Wave after wave of devils came to attack, but the six within the room were able to defeat them all, and gain the chalice of Chigakare.

That led us back to our same old problem of the blood-drop gems and the monodrone. But Fionn had an idea. I gave her my magic pigments, and she painted the last three rubies. Unfortunately we were only able to trick the middle ruby, but that meant we didn’t have to kill the monodrone, so that was a success. We did still have to fight the last two wardrobes: bone demons from the Nine Hells, and will o’ wisps from the Shadowfell.

We were finally able to advance north, and found ourselves out of the cog rooms and in the caverns again. We came to a room that had scraps of metal and tarnished coins, so we went an orc zombie in to test the room. All of his organic armour – the leather, mainly – decayed away. There was a ring radiating necrotic magic out at the end of the room, and as soon as he touched it, it disintegrated. That made the magic effect stop, and we were able to advance.

Further on, we saw stairs leading down to the next level. We decided that we really should finish this level first though, so kept going. We came to a giant cylindrical room with two giant chains moving up and down within. They entered and exited the room from portals to what appeared to be Mechanus. We realised that was how Acererak was powering this whole, evil tomb… he was stealing power from Mechanus! That could not be a good thing… And then a squadron of modrons emerged from the portal above…

We managed to scramble our brains together (mostly me and Zagmira) to talk to them in their own logical language. It was very hard, but we were able to avoid conflict by showing them that we’d rescued the monodrone, and that we weren’t responsible for the theft of the chains. But they were struggling with holding two ideas at once: that Mechanus was perfect and impenetrable, and that Mechanus had been stolen from. The final result was that they tried to go back to Mechanus (including our little monodrone) and it ended up with them disintegrating on the portal below. It was sad… sort of. I mean, they seem like basically soulless androids…

The tabaxis and Oz were able to safely scout ahead, and they found an orrery. There were more continents on the representation of Faerun that we were aware of… There was also a nycaloth hiding inside a model of a moon, which they fought fairly quickly. Zagmira flew over to check out the orrery, and managed to unlock a secret hidden effect: we were all healed a small amount.

We decided to go back and figure out the corridor with the four-armed gargoyle before going down to the final level. We finally noticed a new detail: one of the wall murals had a croc-headed man carrying a chest… and the lock on the chest was real! We had a jade croc key from upstairs, so we tried that, and it worked, revealing a crawlspace. Oz went inside, and found a small hidden room with a strange massive green thing on wheels. Also there was a large red gem. Oz picked it up, and had to flee back into the crawlspace as the massive green thing started to wheel towards him and slam into the wall! He saw the writing on the side… Napaka II!

He tried to fly out the crawlspace back to us, but that made Napaka crash out of the wall towards the gargoyle. It kept trying to go for where Oz was in the wall, so we had to think quickly. Flask remembered that we had a mace that was supposed to destroy Napaka, so we lined him up to bat at the wheeled thing as it came by, and ordered Oz to fly out. As he did, Flask whacked the machine, and it disintegrated completely. A lucky guess! Finally, calm again, we were able to identify the gem as the Eye of Zeltec, another one of the famed treasures of the Tomb.