So James and I have finally gotten around to playing Blue Rose! He’s played it once before at a convention, but we’ve had the Kickstarter edition for ages now. And we’re finally playing a little bit of a campaign with it! It’s probably going to be a lot more episodic than our other campaigns, with no meta-plot, just so there isn’t as much pressure to “finish” it, or to make it have a through-line.

I’ve personally been really excited to play this for ages because the setting sounded really cool. If you haven’t heard of it before, basically it’s romantic fantasy, where you live in a fantasy kingdom where LGBT+ people are all accepted, there are magic psychic animals, and the monarchy is not inherited but the choice of a magical sacred deer. Outside of this kingdom, Aldis, you have other lands, some which are poorer and have more conservative values (e.g. one kingdom is against homosexuality because they need more population), while Kern to the north is basically Mordor.

Given that sort of setting, I was really surprised when I actually started making characters and playing the game. It is way more mechanical, dice rolly and takes way more time to get through encounters than I thought it would. That’s because it’s using the AGE system, which was made for Dragon Age. Mechanical and grindy makes more sense for that setting…

But anyway, we’ll see if my opinion changes or develops further over the course of playing more! For now, let’s get into it.

Our cast of characters includes:

All of these characters are members of the Sovereign’s Finest, agents of the Queen of Aldis. I’ll be telling the stories about our adventures through the medium of mission reports by Nym, the leader of the group. 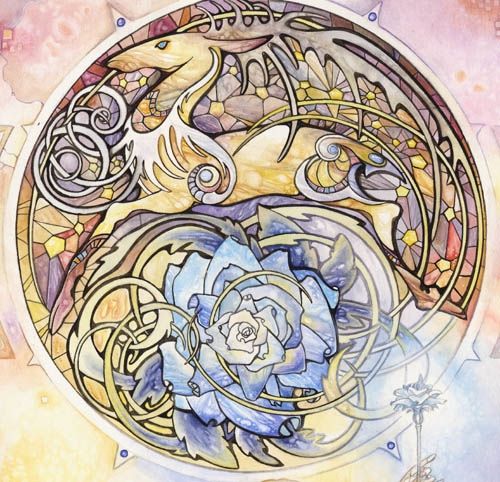 And as you can see, the art in the rulebook is beautiful!

As all three of us had grown up/spent some time in the Pavin Weald, we were all familiar with the fact that monsters often come over the mountains from Kern to infest the Weald, so we were all keen for our first major assignment to be the Tanglewood. While I took the lead on the approach, Orlando waxed lyrical about how wonderful it was to be back in the Weald, while Miranda was more stoic about the patrol. This did lead to some minor squabbling. I distracted them by telling them what I knew of this area of the Weald: that it had once been the haunt of Sorcerer Ebban during the Empire of Thorns, though little was known of him.

Soon I received a mental impression of a vata’an in distress. The message was broken off prematurely. Seeing on our map there should be an old outpost nearby, we picked up the pace to reach it. When we did, it was small and deserted, except for a deer which ran away, and a collection of wind sprites. Approaching carefully, I questioned one named Florin. When I showed her a mental image of the vata’an, she said she hadn’t seen him in a few days, but he did live here with another whom he seemed very close to. Miranda and Orlando hadn’t noticed the sprites, but instead had found some tracks. They started to follow them. With Florin’s assistance, I soon overtook them, and they assumed I was following the tracks, rather than the much more accurate path Florin led me on.

The tangles of the Tanglewood soon closed in, and we found ourselves surrounded by four massive black wolves. Florin vanished. Miranda leapt in front of us, and the wolves dragged her down. She managed to get up every time they knocked her down, her armour too thick for their teeth to do too much damage, though over time they began to wear her down. Orlando got his first opportunity to use his water shaping in combat, splashing the contents of his waterskin into the eyes of the wolves where he could. Usually I would try and lead from the side of the fight and try to avoid melee, but the situation was too dire, so I leapt into combat as well. I was not as effective as Miranda’s swordplay, but the extra addition of my teeth was enough to distract the wolves and give her openings to attack. In the end, I managed to kill three out of the four wolves, and Miranda the other, but Orlando was beginning to get fatigued from the healing he had to throw around to keep Miranda and myself up. As we rested briefly after the fight to get our breath back and bind our wounds, we had to ask ourselves… why did these wolves fight to the death? It was completely out of the ordinary for wolf behaviour.

With Florin gone, we had to wander about trying to trace the faded tracks, but we soon found the unconscious vata’an lying in the briars. It took more out of Orlando to heal him back to consciousness, but the silver-haired man woke. He told us his name, Talaith, and said his lover Dartis had been taken. He told us in more detail, he and Dartis had stumbled upon the ruins of a grand manor, and within, Dartis had found a strange black mask. For a lark, he put it on, and something possessed him, leading to him attacking Talaith.

Refreshed and mostly healed, Talaith asked to join us as we investigated the ruins and looked for Dartis. He mentally showed us the path to the manor, and in his visualisation I recognised the crest of the Sorcerer Ebban on the gates of the manor. Taking great care, we went up to the ruins. On the way, we encountered a strange woman in a circle of stones. Very incautiously, Orlando approached, assuming her to be an innocent, but she turned, laughing a crazy laugh as she cried, ‘Dance with me!’ We ended up having to put her down, realising she was some form of tainted fae. After she died, her mortal form vanished into mist.

Further down thorny paths, we noticed there was no birdsong, despite the uncanny silent birds sitting on tree branches staring at us. I climbed some trees lazily as we went, but the birds eluded me the whole time. We reached the ruins proper, finding the wooden gates rotted away. In the courtyard, we could see more buildings: the manor itself, a stables, a chapel, a forge, and a well. From the forge came the sound of hammering, so I tried to sneak in and scope out what was happening in there. I was immediately noticed by the inhabitant, a satyr who was working on some kind of mechanical creature. He was also attended by a flock of clockwork sprites. I could see the glint of mania in his eyes, and he ignored my attempts at conversation, so I left quickly before I could accidentally spur him to anger.

We checked the stable next, only to find nothing in there except the wall caved in, giving access to the forest. So instead we tried to check out the chapel next. The doors were not rotted here, and were in fact locked! So we went around the side and found a tower that Miranda guessed she could try to climb. She managed to do so, up to the level of the windows, and she managed to crowbar one open. Within was a strangely clean bedroom, indicating recent occupancy. Miranda pried out the whole window and threw it flat to the grass below, so it only cracked dully rather than smashing. Then she rigged up a rope and the rest of us were able to climb in after her. The only exit from here was down into the main body of the chapel itself.

To our amazement, down there we found a dark shrine to the Exarchs! There was another satyr here, bent over a vata’an wearing a mask – Dartis, I assumed. Talaith cried out, ruining our surprise chance. The satyr announced himself as Deradiz, the Lord of Tanglewood, and he brought out his panpipes. When he played them, the room flooded with evil, rotted looking sprites. A fight began in the chapel interior. I tried to knock the mask of Dartis with my psychic powers, while he, or rather the mask entity, fought back with powerful psychic blasts which were difficult to shield from. Miranda meanwhile attacked Deradiz. Talaith laid into the sprites, trying to reach Dartis, calling out to him. Orlando tried to move the mask with his shaping, but it was not having much effect on the psychic entity. As the sprites swarmed Talaith and Miranda, and Deradiz’s panpipes started to make my head spin and my feet dance without my control, Orlando managed to telekinetically snatch the pipes from Deradiz, and smash them underfoot. On a roll, he managed to splash both Dartis and Derzdiz and distract them, while Miranda and Talaith laid into the sprites.

I finally managed to psychically rip the mask off Dartis, and he fired an arrow at Deradiz before fainting. Deradiz tried to wound Orlando and flee, but Miranda managed to behead him before he reached the door. I nursed Dartis back to life, and then we took down the remainder of the sprites, though Orlando was quite thoroughly exhausted by now.

After a rest, we searched the rest of the manor complex (ignoring the still-crazed tinker in the forge – I would recommend some experts on fae possession are sent to try and rehabilitate him). We found no other combatants, but many disgusting artefacts of the Sorcerer Ebban, most rotting. But we found two intact pages of a journal, which I have attached to this report. In short, they detail his observation of the Tanglewood, befriending the fae, and then watching something infest and twist the fae into the forms we met today. It suggests that perhaps Sorcerer Ebban was not initially a villain, but perhaps he too was infected by whatever changed the fae of this area. We have packed these notes, and the wicked mask, and are travelling south again to take them to our superiors.