Taking it easy because James and I are sick. Don’t worry, tests came back and it’s not covid. Hopefully we are well enough to do our board games event on Sunday. We’re definitely not well enough to do our livestream tonight. I need to keep this short so my headache doesn’t get worse looking at a screen for too long.

Whether we are there or not, Julia from Cheeky Parrot Games and the team from Retrospace will be at the board game day on Sunday, so if you’re in Auckland please come and enjoy some chill board games in sunny Takapuna.

James will hopefully resume Dragons of Tirenia next week. Meanwhile, I am lying in wait to pounce next week, when the Chinese translations for Wonderland Nights arrive and then I have to implement them all. I have set up the framework for toggling between Chinese and English, and now I am just waiting for the finalised translations before I continue. Exciting times!

I hear word that the Nine Lives voices are getting closer to completion. I expect to have that out by the end of the year. And then I guess I am getting back to Jentle Hi-ness, finally! My brother even hinted he might have time to work on the music with me. That really fills me with joy. I love his music. I was listening to the music he wrote for my play Dracula yesterday and I just sat there and smiled to hear it all again.

I hope I recover quickly so I am ready to leap into action once those translations are here!

Well, it feels weird to finally be able to say it, but Armageddon is over, and we came out the other end. I’ll do a bit of a recap here, but if you want to hear how the weekend campaign went storywise, you’ll want to tune into our livestream tonight on www.twitch.tv/skybeargames or after that on YouTube. If you want to know what went on behind the scenes in the campaign e.g. mechanics, cause and effect etc, then stay tuned for our podcast episode which will be released on Monday. And if you want to know the inside baseball, besides just the little bit I am going to say below, then sign up to our Patreon for the real goss.

What I will say here is this:

I think that’s all I’ll say for now, here, and for free 😀 If you want to know the more brutally honest reflection, you can find our inside baseball episode on our Patreon in a day or two.

The next three things on my plate are: make a Bitsy game for the jam which is due on Monday; add in all the voice acting, do a regression test and re-release The Nine Lives of Nim; and do the charity stream. Not sure I’ve mentioned that before, so check out this little ad below, or www.gamingforcharity.nz/skybeargames

For James, he is taking a break, and when he is ready he will get back to developing the campaign setting guide for the Kickstarter. He has some really exciting ideas of how to publish it. More on that closer to the time.

There’s more planned, but I don’t want to get too far ahead of myself for now. Maybe next week, we’ll see.

Anyway, I hope you’ll pop over to our livestream or podcast to see what happened on the weekend campaign. It was epic. James will break it all down for you so you can understand what happened. See you there!

Our friends at Cheek Parrot Games have another product coming out that we are super excited about, and as of writing the kickstarter campaign is almost 75% of the way there! We’ve played this game in prototype so much, we just love it. Basically it’s up there for me with Love Letter in terms of ease of play and repetition of play. It’s called Flaming Pyramids. Check it out here: https://www.kickstarter.com/projects/cheekyparrot/flaming-pyramids-game 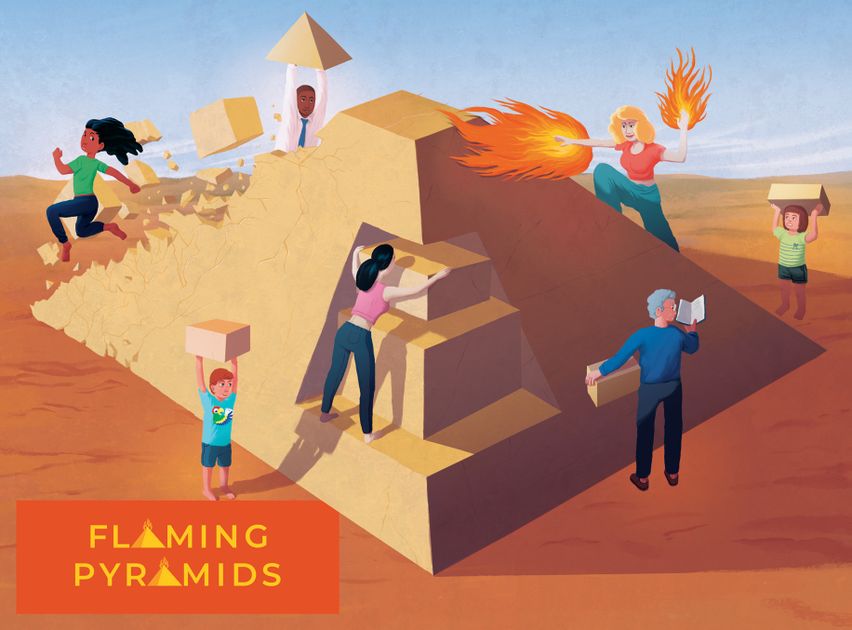 Cat Capers has arrived in NZ! Hooray! Last night James, Julia and I started mailing and delivering them. We’ll be having a launch party: you’ll get something about that if you backed our PledgeMe campaign. You’ll start to see Cat Capers in stores soon in NZ. So exciting!!!

Don’t forget to check out http://www.cheekyparrotgames.com for more info.

Hey everyone, I know it’s been a while. That’s because James and I have been working super hard on our board game Cat Capers, in conjunction with Cheeky Parrot Games. Head on over to https://www.pledgeme.co.nz/projects/3535-cat-capers and reserve yourself a copy today!

So we’ve kept this under wraps for a while now, but we can finally announce it… James and I are having a board game published, and it will be on the shelves in time for Christmas shopping!

The game is currently called Cat Tales (a working title). You and the other players are cats, and the aim of the game is to have as much fun as possible before your humans get home. At that point, which ever cat is the happiest wins!

We’re collaborating with Cheeky Parrot Games to get it tested, manufactured and distributed among other things. Visit Cheeky Parrot’s website and Facebook to find out more. The first few rounds of testing are going to happen at the St Heliers TableTop Day, Board Games by the Bay (Auckland) and WellyCon. Do you want to be part of the testing, or even be part of blind testing? Follow this link to find out more. We’re really excited to be working with Julia of Cheeky Parrot Games and can’t wait to test and develop and eventually sell our first real actual board game!